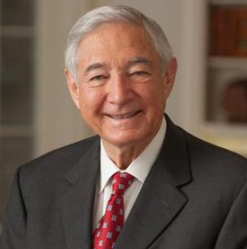 Leadership Award recipient.  The award will be presented at a dinner on Wednesday, October 14 from 6:30 to 9 p.m. at the Hilton Anatole Hotel’s Grand Ballroom. Established in 2005, the award recognizes individuals whose demonstrated commitment and excellence in community leadership emulate the achievements of former Dallas Mayor Robert S. Folsom. Event co-chairs include Harold MacDowell, CEO of TDIndustries, J. Robert “Bob” Ferguson and Louis B. “Ben” Houston.Lowe has worked with Ferguson and Houston for 50 years at TDIndustries.

Methodist Health System Foundation President and CEO April Box Chamberlain said, “Jack’s servant leadership has helped resolve many complex business and community issues, including support for the Dallas Independent School District (DISD), Momentous Institute and others. We look forward to honoring his many achievements, which have had an incredible impact in our community. Plus, as with past Folsom events, we will have a few surprises in store for those who attend to help us honor Jack!”

Lowe is an innovative business leader who served as CEO of TDIndustries from 1980 until his retirement in 2004. Even in retirement, Lowe remains an active Board Chair. Under Lowe’s leadership, TDIndustries developed into one of America’s premier mechanical construction and facility service companies.

He is a Salesmanship Club of Dallas member and past president and serves on the boards of Momentous Institute (formerly Salesmanship Club Youth and Family Centers) and NACD North Texas. He also serves on the corporate boards of KDC, Drew Industries and, until its sale in May 2014, Zale Corporation. He is a member of the Dallas Citizens Council. From 1962 to 1964 during a pivotal time in space exploration, he served in the U.S. Navy assigned to the Manned Spacecraft Center in Houston, now called the Lyndon B. Johnson Space Center. Of note is that he worked with the first group of astronauts including John Glenn, Alan Shepard and Neil Armstrong. Lowe graduated magna cum laude with a bachelor’s degree in electrical engineering from Rice University.

Michelle Kinder, executive director of Momentous Institute, said, “Jack is unlike any other community hero I know. He is often the smartest person in the room but never acts like it. He goes toward the most complex issue with levity and hope and can generate conversation and consensus where most would throw their hands up. He’s a personal hero for many and a fantastic choice for this honor.“

For those interested in supporting the Robert S. Folsom Award, the Leadership Circle underwriting begins at $10,000. That level of sponsorship includes invitations to an exclusive patron party. For more information, please contact Methodist Health System Foundation Vice President Angela Nash at 214.947.4596 or angelanash@mhd.com. More information is available at https://foundation.methodisthealthsystem.org/.