Dallas, TX — On October 14, Methodist Health System Foundation honored Jack Lowe, Jr. as the 2015 Robert S. Folsom Leadership Award recipient at its annual fundraiser. Established in 2005, the award recognizes individuals whose demonstrated commitment and excellence in community leadership emulate the achievements of former Dallas Mayor Robert S. Folsom. Because of Lowe’s commitment to education and children, this year’s proceeds of more than $1.3 million will go to support Methodist’s Centering Pregnancy Program, which has reduced premature rates by more than 50 percent, and to the Centering Parenting program to assist young mothers and their newborns during the first year of life. 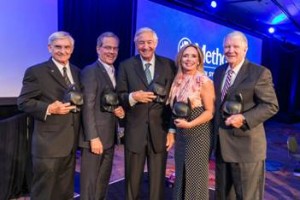