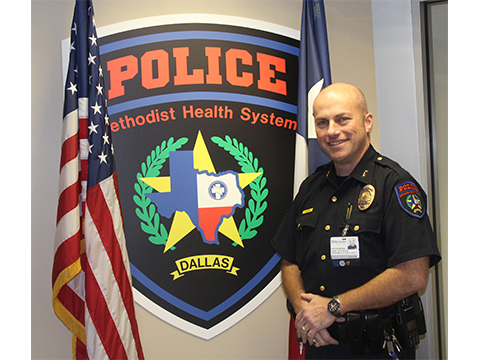 Some people are lucky. Even at a very young age, they know what they want to be when they grow up. I am one of those people. When I was 5 years old, I wanted to be a policeman. I know many little boys say the same, but for me it was a dream.

As I matured, I knew I wanted to stand for something good. My upbringing reinforced the idea of giving back. I grew up in Ennis, Texas, and had many great people in my life who were wonderful mentors. I was in the Boy Scouts and achieved the rank of Eagle Scout. There’s no doubt that helped form my resolve to serve others and led me into public service.

Like healthcare, I believe police work is a calling for the vast majority of officers everywhere. And I believe the overwhelming majority of the public supports us. We have a great opportunity to bring some equilibrium back to our relationship with the community. What is my mission? It’s to raise the bar to help our communities understand our experience, our professionalism, and our mission to serve others and keep them safe, inside the hospital and out.

My career has been full of variety. I spent two years working with death row inmates in Huntsville, Texas. It may sound shocking, but in many ways, being a guard on death row was easier than patrolling a neighborhood where you don’t know what to expect. Even though I worked with people who had been convicted of capital crimes, I learned two very important lessons:

In 1993, I joined the Corsicana Police Department and later moved up the ranks in the DeSoto Police Department. I was fortunate enough to attend the School of Police Supervision and later the Command College at the Center for American and International Law’s Institute for Law Enforcement Administration. Through my education, I embraced that I was meant to be a leader. Now, I’m working on my master’s degree in public administration.

This January, I was blessed with the opportunity to transition into hospital policing as the chief of police for the Methodist Health System police department. I tell our officers that Methodist is the nicest place I’ve ever worked. The level of support here has been overwhelming. With the scrutiny that has been placed on law enforcement throughout the country, we have a unique opportunity to change the narrative. While some might view law enforcement as a necessary evil, the hospital environment lends itself to spotlighting how we’re truly part of the solution. We’re here to help.

I am fortunate to have an allocated group of 55 dedicated police officers serving five Methodist campuses. We also have a dedicated support, dispatch, and PBX communications staff working to keep Methodist a safer place.  I’m always looking for potential candidates to join our team. We look for officers to join our force who are genuine, compassionate, value driven, and mature and who have at least two years of experience dealing with difficult environments, such as working in a prison or serving in the military. At the end of the day, we’re here to serve everyone who visits our campuses.

Regardless of who holds your commission, we’re in the people business — people taking care of people. For our police employees at Methodist, we have to remember that they have to be taken care of as well.  After all, we’re people who have families and needs, too. And when there is a tragedy in our work, we grieve like everyone else.

Why should a police officer consider working for Methodist? Our new campaign is “Trust Methodist,” and for me, it says it all. As a faith-based organization, I think it’s important that the foundation of our calling comes from the heart. If you have the desire to fill that need, I can think of no better organization than the Methodist Health System police department. Visit us at Jobs.MethodistHealthSytem.org.