Anything Is Possible — Just Ask Lisa Bennett, BSN, RN, and her Family 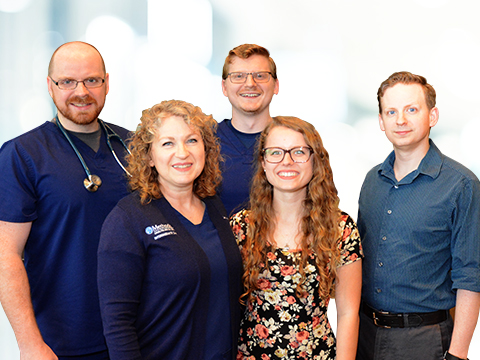 Lisa Bennett and her family

You’re never too old to achieve your dreams, and Lisa Bennett is the perfect example. Ever since she was a child, she has wanted to be a nurse. A mother of seven who home-schooled her children, Lisa thought the opportunity to be a nurse had passed her by.

Was she really too old? With her husband’s encouragement, Lisa decided to go back to school at age 40. That’s when her life intersected with Methodist Charlton Medical Center.

“Some of my clinical rotations for college were completed at Methodist Charlton,” Lisa says. “I loved it. In fact, the hospital hired me as an extern, and 10 years later, I’m still here in the same department, intermediate care. I guess I set a good example for my children because now four of them also work at Methodist Charlton. Even though they all started out as telemetry technicians, each has made his or her own way in nursing.”

Four following in her footsteps

“My mom really set a high bar for us, and we trust her,” Caleb says. “We felt she chose a good place to work, so we were drawn to Methodist Charlton, too. Because of our mom, we were excited about the culture of the hospital even before we started working there. It’s been a real blessing for us.”

Joshua joined Methodist Charlton in 2017 as a telemetry technician and is following in his mother’s and siblings’ footsteps by going to nursing school. Ary also joined the hospital as a telemetry tech in late 2017, and she is finishing her prerequisite courses to enter nursing school. Her goal is to be a nurse midwife. As far as Lisa’s other three kids’ careers, healthcare may or may not be part of their lives.

You may be wondering how the Bennett family dynasty at Methodist Charlton really began.

When Lisa was in nursing school, Kiah helped her study. “He liked learning the names of the bones; it really intrigued him,” Lisa says. “That evolved into his love of telemetry. Then he became passionate about learning how the heart worked and how the blood pumped. Previously, Caleb had received a degree in business, but in 2008, the financial world was falling apart, and finding a job was challenging. So he took a science class, was mesmerized, and decided to become a nurse.”

Joshua was working at a state park, but felt he needed more of a challenge. “We kept suggesting he consider nursing, and he finally took a few prerequisite courses and really enjoyed them,” Lisa says. One thing lead to another, and before long, Joshua applied to be a telemetry tech at Methodist Charlton. He also cross-trained to be a secretary, allowing him to work as needed while he was in nursing school.

While Lisa relishes the fact that four of her children work for the same hospital as she, they rarely see each other, but they share the same loyalty to Methodist Charlton. She is proud of the comments others make about her children, using adjectives like smart, great, and polite. “The one thing I’ve tried to instill in my children is the philosophy that we need to strive for excellence — good enough is not adequate,” Lisa says.

Some of the accomplishments that she is proudest of include being named a Great 100 Nurse in 2017, being a preceptor to help other nurses build their skills and confidence, and co-chairing the National Database of Nursing Quality Indicators initiative that works to reduce the incidence of pressure ulcers.

Lisa credits the leadership of Methodist Charlton and Methodist Health System for enabling her to realize that anything is possible. “Our leadership is very supportive,” she says. “Caleb and I received our bachelor’s degrees through Methodist’s tuition reimbursement program. Plus, they see us as individuals. That’s made it possible for me and my children to make our own ways in nursing. It has also strengthened our shared values of dedication, dependability, and taking our roles as caregivers seriously. Who could ask for more?”

If you’re interested in pursuing your nursing possibilities, visit Jobs.MethodistHealthSytem.org.