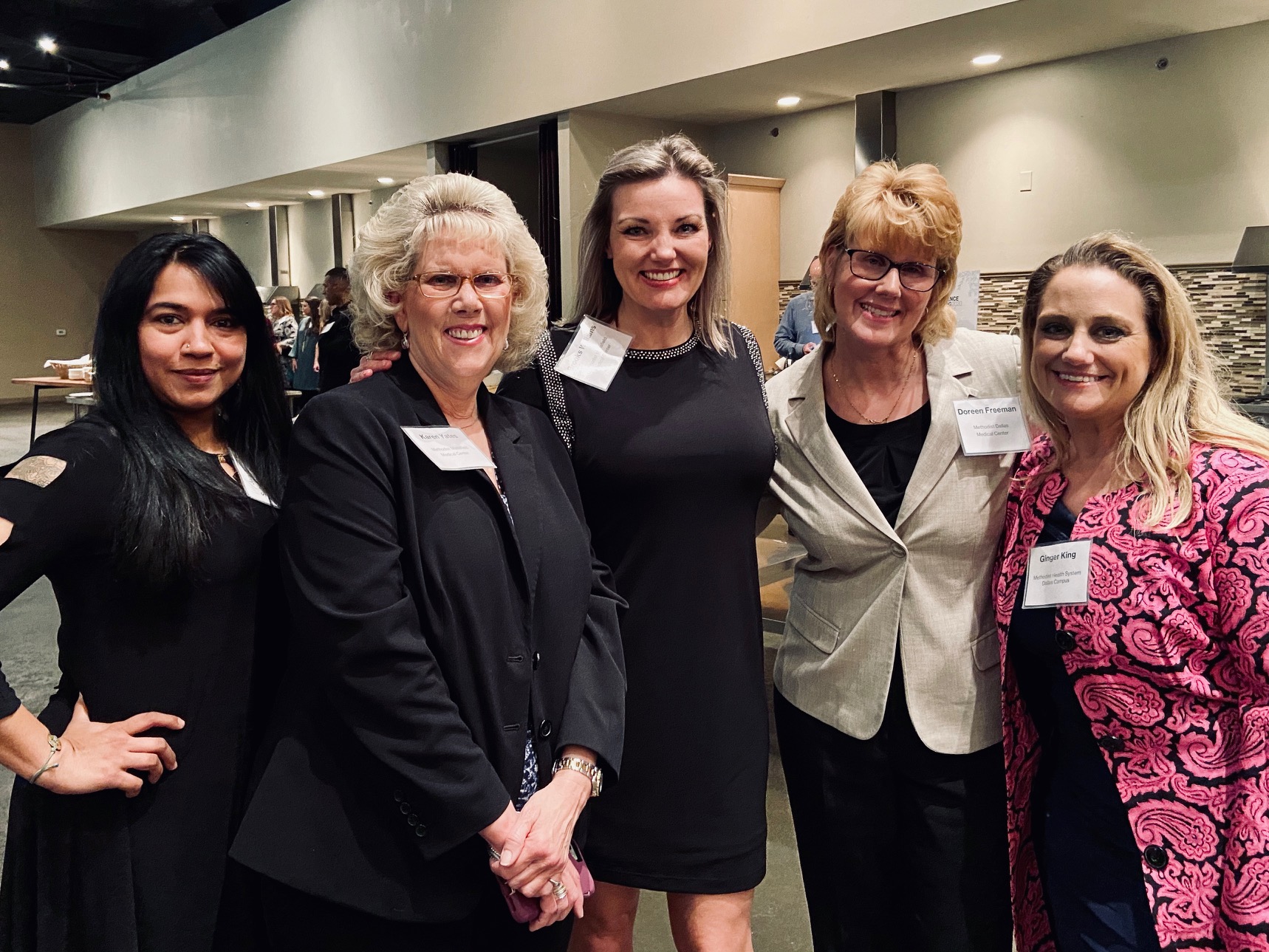 Nurses are truly the face of healthcare. They are the clinicians who spend the most time with patients. They’re caregivers who consider their job a calling. They’re the people who go the extra mile for patients and families. No wonder nursing is the most trusted profession in America.

Every year since 2012, D Magazine’s Excellence in Nursing awards has honored a select number of nurses. Nominated by their peers, these winning nurses have shown an extraordinary commitment to healing. Methodist Health System is proud to announce that nine nurses were chosen for the 2020 Excellence in Nursing Award. We’d like you to meet them.

Ginger King is the director of acute care services. She designed and implemented an electronic, automated organ and tissue donation referral system that resulted in a 100 percent rate of timely referrals and zero missed organ referrals. As a result, she helped more people receive life-saving organs.

Ginger is also an advocate for work practices that focus on cognitive, cultural, and emotional support, such as mindfulness-based stress-reduction programs.

Janaki Subramanian runs the Methodist Dallas Sexual Assault Nurse Examiner (SANE) program, the only one focused on the underserved population in southern Dallas. Janaki and her team have been able to identify and help human trafficking victims who visit the emergency department. Because of her compassion and training, victims have felt comfortable confiding in her. As a result, she was able to help save 20 victims who were being held in a house in Dallas.

Janaki also educates the community about the SANE program wherever she can, appearing at health fairs, back-to-school events, or anywhere she can let survivors know that her team offers comfort and justice to those who need it most.

Jessica Cooper loves her patients. She sits with them and listens, even to those, like stroke patients, who find it difficult to talk. She remembers how her grandfather suffered from strokes because of his high blood pressure. In his honor, she founded Asaie’s Angels, a nonprofit organization that offers blood pressure screenings and information on preventive healthcare and mental health to those who may not have a primary care physician.

Jessica also loves her co-workers. Last Thanksgiving she had the day off. But knowing that her working colleagues couldn’t be with their families, she surprised them by delivering a home-cooked, full-course Thanksgiving meal.

Alaana Garris is a neonatal nurse practitioner who gives 110 percent. Continually looking for ways to improve care, she was instrumental in obtaining Level II neonatal designation for the hospital. Always the educator, she is a clinical instructor at Mountain View College and a frequent presenter at symposia.

Once Alaana attended the birth of a baby whose undeveloped brain ensured she would not survive. Because the parents were too bereaved to see the baby, Alaana held her in a rocking chair for two hours, singing to her until she passed away. When the family recently returned to give birth to a healthy baby, they made a point to thank Alaana for the compassion she showed to their firstborn.

Michael Hernandez is director of nursing for medical-surgical/telemetry and completely dedicated to patient satisfaction and employee engagement. He led the opening of a critical care intensive care unit and a postcoronary intervention unit. When he was leading the ICU, it was in the top five performing units in employee engagement, and it earned a perfect score (100 percent) on the Press Ganey survey, receiving a top performer award for four consecutive quarters. He also implemented a plan to increase patient satisfaction and quality in dialysis services.

Michael often steps up to serve both in and outside the hospital. While on the sepsis team, he helped save 56 lives. He volunteers at career days, UIL sports physicals events, and toy drives. As a minister, he’s always keen to offer spiritual healing to patients and co-workers alike.

Laura Sweatt, our Magnet® director, led the hospital’s initiative to revise the nursing professional practice model, completely revamping the structure of the Shared Governance Council. Serving as a principal investigator on many research studies, she has presented a study on nurse resilience to organizations locally, nationally, and internationally. She also implemented a nurse scholars program to teach nurses how to conduct research.

Because Laura has championed professional certification, the hospital now has more than 200 certified nurses. On top of that, she started the pet therapy program and the highly successful Recovery Notes therapeutic music program.

Jeremy Taylor is the director of emergency and trauma services. He constantly looks for ways to improve processes. For example, he led initiatives to improve patient satisfaction in the emergency department, which now ranks in the 99th percentile. He also developed a split-flow process for emergency patients that resulted in shorter door-to-provider times, shorter stays, and more beds available for severe patients.

Fifteen years ago, a patient came into the emergency department following a serious accident that caused fatalities. Jeremy not only kept in touch with the patient but developed a friendship. Now, the two share their story at high schools to warn students about drinking and driving.

Brooks Williams is the director of nursing critical care. She started a model of care for cardiac surgery patients that decreased their length of stay from 8¼  days to 6½ days, and she presented her innovation at the 2019 Magnet Conference® in Florida.

Brooks began a Fitbit step project to promote walking and improve the health of postoperative cardiovascular patients. She initiated a mobilization program to reduce the average stay of ventilated patients by more than two days. She also shares her insights to her staff on YouTube. Her succession planning program to grow nurse leaders was adopted by Methodist Health System. And, among many other achievements, her project on hospital-acquired pressure injury reduction won the DFW Hospital Council Fire Starter Award.

Karen has taught at many symposia and trauma conferences. Named among the DFW Great 100 Nurses, she has increased the knowledge of her profession and our community.

Methodist is extremely proud of these winners of the Excellence in Nursing awards. It is a joy to celebrate their achievements and an honor to count them as part of the Methodist family.

If you’re intrigued about what makes Methodist employees so often recognized, we invite you to explore the award-winning workplace environment that encourages nurses to excel and thrive.